The vision behind Yoalin (Youth Alpine Interrail) is affordable sustainable travel within the Alpine region. The CIPRA Youth Council CYC together with CIPRA International are still working on this within the “Alptick”-project, one ticket for all public transport in the whole Alpine region. The work has already borne fruit. In 2021 travellers to Switzerland are the first to experience the mini AlpTick creation: Sustainable travel is one step closer to the goal of a unified Alpine ticket for trains and buses with the Graubündenplus Ticket. 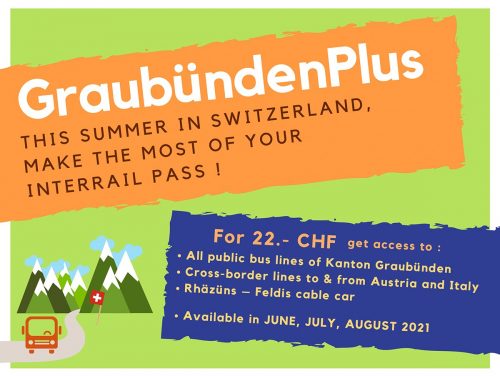 What?
The GraubündenPlus ticket is a ticket for the area of the Swiss canton of Graubünden and the border region of Italy and Austria. The ticket includes all bus routes within the canton, cross-border routes to and from Austria and Italy and the Rhäzüns – Feldis gondola.
How much?

The GraubündenPlus costs CHF 22.-. It can be purchased at all Rhätische Bahn offices in Canton Graubünden (CH), and in the region of Ticino (CH). Outside of Switzerland, GraubündenPlus is purchasable at the train stations of Chievenna (IT) and Tirano (IT).

GraubündenPlus is available in June, July and August 2021.

The canton of Graubünden in the east of the country is the largest canton in Switzerland in terms of area. It is home to the Swiss National Park. The canton has a well-developed public passenger transport system, which makes Graubünden one of the key transport hubs in the Alps. This has also been recognised by UNESCO, which has included some of the railways in its list of World Heritage Sites. Among them is the Bernina Express, one of the most attractive railway routes in the world. It takes you from the heart of the region to Italy, which is also part of the GraubündenPlus. In North Tyrol, you’ll enjoy hillwalking in the Dolomites, while in Lombardy you can relax in the great glacial lakes of Como and Maggiore. GraubündenPlus also takes you to the Austrian Tyrol.

The ticket is for young travellers up to 25 years of age. To use the ticket you need a Global or Swiss Interrail or Euraill Pass. The GraubündenPlus is valid on days when the traveller uses the Interrail pass.

Apply now to become part of YOALIN and gain a broa

«YOALIN is a life-changing experience, not only b

This website uses cookies to improve your experience while you navigate through the website. Out of these, the cookies that are categorized as necessary are stored on your browser as they are essential for the working of basic functionalities of the website. We also use third-party cookies that help us analyze and understand how you use this website. These cookies will be stored in your browser only with your consent. You also have the option to opt-out of these cookies. But opting out of some of these cookies may affect your browsing experience.
Necessary Always Enabled

Performance cookies are used to understand and analyze the key performance indexes of the website which helps in delivering a better user experience for the visitors.

Analytical cookies are used to understand how visitors interact with the website. These cookies help provide information on metrics the number of visitors, bounce rate, traffic source, etc.

Advertisement cookies are used to provide visitors with relevant ads and marketing campaigns. These cookies track visitors across websites and collect information to provide customized ads.

Other uncategorized cookies are those that are being analyzed and have not been classified into a category as yet.

SAVE & ACCEPT
Powered by